Make Halloweekend brunch just a little more fun and a lot more gruesome with these Gory Guts Cinnamon Rolls. A two ingredient recipe makes this grotesque treat a walk in the haunted park. Grab a batch of pre-made cinnamon rolls and some bloody jam and get to work. Unroll the perfectly crafted buns and get creative with your gory guts. We used cherry jam to mix with the glaze but you could also use red food coloring to really make your guests squirm!

Believe it or not, this recipe only requires two ingredients!

Lightly spray a quarter baking sheet with cooking spray. You could also lightly butter it with unsalted butter. Remove the cinnamon rolls from the packaging and unroll the buns. Twist and coil the unraveled cinnamon roll dough to create the “guts.”

Bake your cinnamon rolls for 18-22 minutes or until they’re fully cooked and lightly browned.

While the cinnamon rolls are baking, mix the icing included in the package with the cherry jam.

Remove the tray of cinnamon rolls from the oven and let them cool for 5 minutes before frosting with the “bloody” icing.

Make your own cinnamon rolls.

Thankfully, I have an amazing recipe for Black Walnut Cinnamon Rolls With Brown Butter Cream Cheese Frosting. You’re going to do a few things differently to make your Gory Guts Cinnamon Rolls.

Bake your cinnamon rolls according to the recipe instructions.

Make the frosting according to the instructions and add red food coloring and cherry jam.

My favorite thing about the cinnamon roll recipe is the dough can be made the night before and left to proof overnight in the fridge, so your mornings will be just as easy as if you used the packaged cinnamon rolls! Pop those babies in the oven and you have a sweet and delicious breakfast (plus the gore, of course).

Lastly, if you make this Gory Guts Cinnamon Rolls recipe, be sure to leave a comment! Above all, I love to hear from ya’ll and do my best to respond to every comment. And of course, if you do make this recipe, don’t forget to snap a pic and tag me on Instagram! Looking through the photos of your dayyyummm good recreations is my favorite! 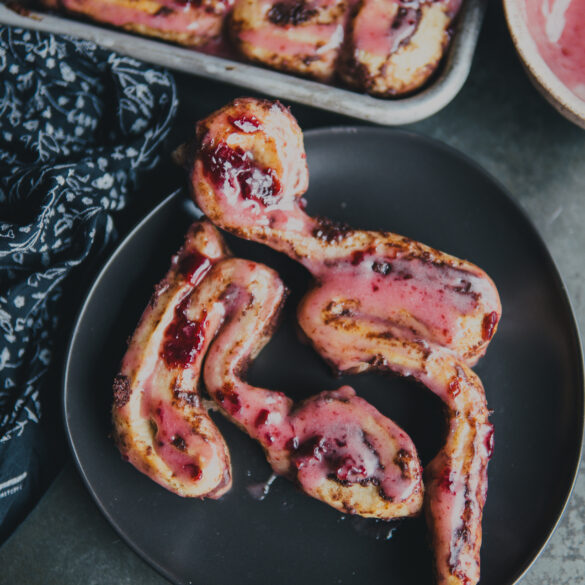 You may also love

Hi! I’m Sammy, a self-taught home cook, and author. I began cooking as a way to feed my desire to learn and be creative. I love how food brings people together. Here, you will find a variety of things – from healthy recipes to comfort food and indulgent desserts. Life is about balance and togetherness. So go ahead, cook a feast, invite your people over and take a big bite!