The perfect morning consists of waking up to the smell of these Black Walnut Cinnamon Rolls baking in the oven. Extra points if it’s a crisp fall morning and you enjoy your fresh-baked cinnamon rolls with a nice hot seasonal-flavored coffee.

These Black Walnut Cinnamon Rolls are a great recipe to prepare the day before and pop in the oven first thing in the morning so you can start your morning off with the smell of fresh cinnamon rolls in the oven.

Complete all the steps of this recipe up until right before you put your cinnamon rolls in the oven. Instead of doing the second proof you’re going to put the rolls in the fridge (it’s listed as an option in the recipe directions).

Here are a few to try:

Lastly, if you make this Black Walnut Cinnamon Rolls with Brown Butter Cream Cheese Frosting recipe, be sure to leave a comment! Above all, I love to hear from ya’ll and do my best to respond to every comment. And of course, if you do make this recipe, don’t forget to snap a pic and tag me on Instagram! Looking through the photos of your dayyyummm good recreations is my favorite! 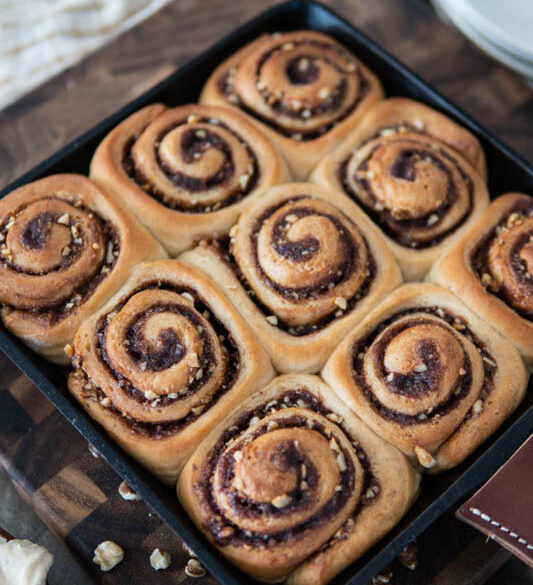 You may also love

Hi! I’m Sammy, a self-taught home cook, and author. I began cooking as a way to feed my desire to learn and be creative. I love how food brings people together. Here, you will find a variety of things – from healthy recipes to comfort food and indulgent desserts. Life is about balance and togetherness. So go ahead, cook a feast, invite your people over and take a big bite!

Sign up here for the Feeding the Frasers Newsletter. Stay up-to-date on all new recipes, products and partner promotional deals!